America’s fundamental problem at this time is sin and rebellion against God, and our primary response should be Biblical repentance and reformation by God’s grace. American patriots need to return to a local Bible-based approach to politics and reject the current centralized Babel empire model based in Washington, DC. The Book of Revelation in the Bible is the outline of world history from the Apostolic era to the future Second Coming of Christ, providing a general roadmap for Christians to follow. There is good reason to believe the Federal Government based in Washington, DC is the modern Babel described in Revelation chapters 17 and 18, and that wicked foreign nations (without the help or support of American patriots) will bring her down (Revelation 17:16), as explained in the book at https://www.amazon.com/dp/B01CJ2CUNG .

American patriots should work towards a restoration of the historic Christian decentralized USA by a return to the Articles of Confederation (the USA’s original constitution which was illegally abandoned in favor of the Federal Constitution) out of a subset of this empire, and we need to be wise enough to patiently wait for wicked foreign nations like China and Russia to bring down this empire (albeit we should neither approve nor assist the wicked foreign nations in doing this), making way for such restoration.

The patriot preparation now should include seeking to establish a model reformed Christian community which can be a model for other communities to follow. This model community was described in a series of newsletters back in 2013:

More recently it is described here.

In addition, counties and townships could seek by God’s grace to do the following:

1. County and Township leaders adopt Second Amendment sanctuary resolutions, at the encouragement of local citizens, as such are being tracked at the website https://sanctuarycounties.com/ .

2. County and Township leaders take measures necessary to ensure election integrity and public confidence, at the encouragement of local citizens. This encouragement can include letters to local leaders such as this.

4. County and Township leaders implement County and Township supported and authorized citizens militia, under the regulation of the local and State governments, at the encouragement of local citizens, in accordance with the Second Amendment and the Articles of Confederation (the USA’s original Christian constitution to which the nation covenanted). A well-regulated militia is “necessary to the security of a free State”, as the Second Amendment states.

6. County and Township leaders conduct citizen referenda on the question of return to the constitutional order established by the Articles of Confederation– an order which was illegally abandoned. Patrick Henry and other antifederalists warned how abandoning the Articles of Confederation and adopting a supreme centralized Federal Government based in Washington, DC would progressively and inevitably lead to political tyranny and loss of liberty.

The end result of this approach by God’s grace would hopefully be that the “red areas” in the map below would have a nation of sovereign States under the Articles of Confederation which will preserve the historic USA according to its original 1776 vision, while the “blue areas” would sadly but likely have some form of Marxist, globalist government, until the “blue areas” themselves likely politically sub-divide: 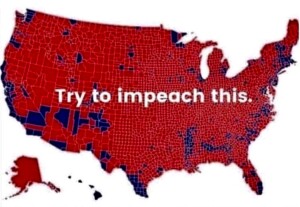 This end result is far better than the whole sliding into complete Marxist tyranny, as part of the Great Reset and Agenda 2030. This global program is supported by the Roman Catholic Pope, UN, World Economic Forum, US Democrat Party leadership, Communist China leadership, etc. It is effectively a modern Babel empire which Revelation 18:4 suggests we should separate ourselves from.

Patrick Henry rightly said: “Is life so dear, or peace so sweet, as to be purchased at the price of chains and slavery? Forbid it, Almighty God! I know not what course others may take; but as for me, give me liberty or give me death!” Are we American patriots or not? Is this “the land of the free and home of the brave”, or is it “the land of slaves and the home of cowards”? Do we seek true liberty which can only be found by submitting to the Lord Jesus Christ?