What Captain John Smith was to English settlement of North America, Colonel Thomas Cresap was to their westward advance beyond the eastern seaboard.  Both were pragmatic frontier leaders and businessman rather than philosophically minded men.  So the nature of their influence was different from men like William Bradford, Roger Williams, Cotton Mathers, Jonathan Edwards, Benjamin Franklin, Thomas Jefferson, and James Madison.  Yet in their own way, these pragmatic frontiersmen were just as influential.  Both faced considerable obstacles, and both overcame these obstacles according to God’s sovereign will.

What Thomas Cresap did as a pragmatic businessman in leading the Ohio Company paved the way for rapid settlement of the Ohio River Valley territory, which in turn precipitated the French and Indian War/Seven Years’ War.  The road he spearheaded in developing (“Nemacolin’s Trail) made possible settlement of the Ohio River Valley.  His road became the first federal highway, which gives some idea of its importance.  It was the key to unlock westward expansion of the English colonists, which before that had been locked up inside the Eastern seaboard.  When the French realized what he had unlocked, they knew they had to move into action quickly to try to stop the English colonial advance, or it would forever be lost.  The English forces used his road to move into the Ohio River Valley and eventually defeat the French.

After the French and Indian War, the British decided they needed to tax the English colonists (to help pay for the war) and to contain their westward expansion.  Both did not sit well with the English colonists, which led to the American Revolution , which Thomas and Michael Cresap participated in, which itself was precipitated in part by what is called “Cresap’s War”:
https://www.encyclopedia.com/history/encyclopedias-almanacs-transcripts-and-maps/dunmores-or-cresaps-war
An earlier Cresap War precipitated establishment of the Mason-Dixon Line and in various ways anticipated and eventuated in the US Civil War (pitting the North against the South):
https://www.smithsonianmag.com/smart-news/long-violent-border-dispute-between-colonial-maryland-and-pennsylvania-eventually-required-king-step-180963333/
https://en.wikipedia.org/wiki/Cresap%27s_War

Additional information is available at: 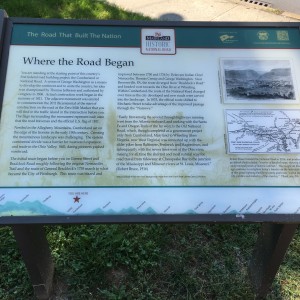